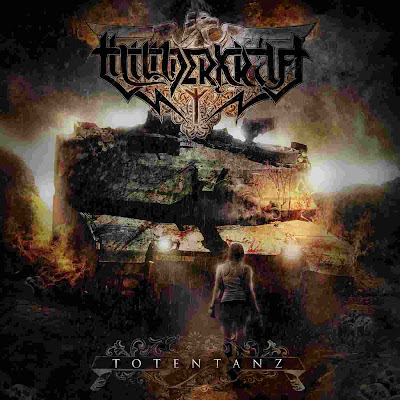 
If you looked at this band's genre description and thought to yourself "whatafuck", yeah well don't blame me because that's keeping things simple. If you really want your mind to explode, I mean really explode with blood and brain matter covering the walls like abstract art, then you need to listen to Totentanz. After my first listen to this I ran outside into the pouring rain and screamed. Seriously there's only so much a human being can take and I'm on vacation damm it. All of this comes from the mind of band main man Master Alafern (who's responsible for the guitars, vocals and violin). Around a decade ago Alafern had this idea to start a band combining his love of Death Metal and Ukrainian folklore. Crazy ain't it? (that's a joke) In 2005 he and a few cohorts resembling a band released their debut full length, The Banner Of Victory. Unfortunately it was a bitter one since that was the last the band was heard from until now.


Fast forward to the now with Totentanz the band's long awaited
sophomore effort . If you were a fan of their debut, and frankly who wasn't, then be ready for a surprise. The death and folk aspects have been blackened with some more of a symphonic edge courtesy of keyboardist Anna Merkulova. The opener, "Настане Час" aka: "A Time Will Come" is an epic blast of all of these elements. This is not to be confused with pagan folk metal or any similar genre variety. THUNDERKRAFT are an entirely new breed as far as what my ears have heard over the years. Next is the added industrial structures being added with factory precision. Further along or actually by the third cut which is also the title cut "Totentanz" aka: "Dance of The Dead", is when the band introduces the electronica elements. All that's missing from this is the lights and the drugs.


While I kinda find some of this a little too far gone into the industrial heap I must say that THUNDERKRAFT has joined the ranks of many past greats who have added a new dimension onto a sacred metal genre cow. Although I'dhttp://www.blogger.com/img/blank.gif say some people don't even consider folk metal to be a genre. Whatever the case, unorthodox seems to fit the bill when it comes to this band. Welcome all who dare to the world of post folk metal.