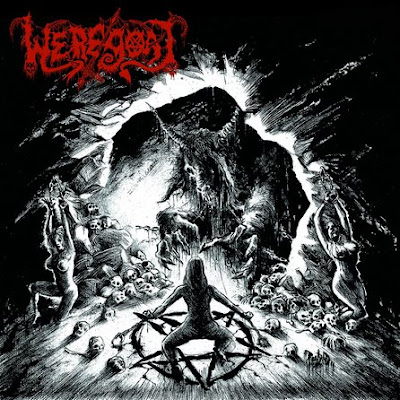 
This release originally came out last Nov. but definitely deserves a review here now for a number of reasons. First off I'd like to take this release and shove it down the throat of anyone in the metal media who pushes the notion that in order for black metal to survive it must progress. Then watch their chest explode as the weregoat comes out of the bloody hole like the creature from Alien. From that point on maybe the weregoat goes North to some mushroom farm and massacres a bunch of cascadian hippies. Although I heard on the news that they all got buried in an avalanche which makes me feel sorry for the snow.

Well without turning this review into a new horror movie script or what I'm usually accuse of, an op/ed. The bottom line is that black metal is fine and doesn't need a bunch of ulterior agenda pansy pundits telling it where to go. That's as long as there are bands like this one churning out pure blasphemous filth. WEREGOAT is a three piece act who hail from Portland, Oregon and is made up of members from other area greats like doomsters ALDEBARAN or the death merchants SPLATTERHOUSE. That's only two of many bands the members of WEREGOAT have been involved in. Musically they're not rewriting the genre handbook. Instead they're adding a new burnt and bloodsoaked page to it.


Do you like your blackened death bestial? When the bands BLASPHEMY and BEHERIT are mentioned do you break out with a sinister smile that scares onlookers? Are your favorite colors blood red, black and blacker? Then friends this band is for you. Since this is just another musical project for these guys one can never know if WEREGOAT will continue on a long path of audio death and destruction. Which makes this even more worthy of your ownership. Most of the time I hear similar material being regurgitated from the bowels of some South American city ghetto. A few North American bands have done similar material. On Unholy Exaltation of Fullmoon Perversity WEREGOAT are the latest force to bludgeon listeners with the raw primal display of ugliness. The atmosphere is like that of a charnel house.


When a band opens up their debut release with a song titled "Nuclear Cunt" you basically know what you're getting into. Riffs that sound like the cracking of leather a hundred times over. Vocals sounding more like monstrous moans from cavern beasts. Drums beated by a psycho with a hammer. Yes what's not to love about all of that. As the release continues WEREGOAT alters tempos up a notch on “The Hideous Stench of Occult Slaughter” just enough to give you the feeling of death creeping up on you. "Abysmal Whore" is what happens when you're caught. Other cuts like “Invoking the Black Oblivion” are slow and diabolical as if drowning the listener by holding your head in black ooze. In the end everything on here is exceptional in a horrifying way which will not sit well with non extreme types. Grab this fucker by the horns and run.