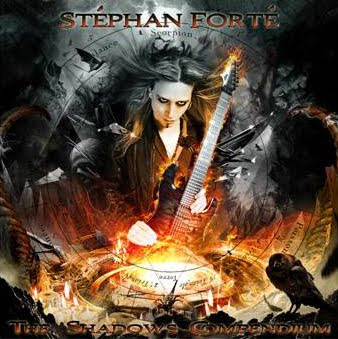 
I'm surprised this wasn't just called Stephan Forte's Rising Force since Forte is France's version of Yngwie Malmsteen and followed a similar guitar virtuosos path as well. Most people know Forte from his being a member of the French progressive metal act ADAGIO. That band has made a huge name for themselves for the past decade although mainly in Europe where this style of music still has a huge fanbase. Now Forte, aka: o'l raccoon eyes, has stepped out with his first solo album. Personally I'm not a fan of this neo-classical metal in fact I've always thought that it's only appealing to other guitarists who get off hearing someone else wank out. This is for fans of Joe Satriani and Steve Vai. It also fills the void once you've gotten tired of watching Yngwie's How to Play Guitar like a Virtuosos for Peasants DVD.


I guess the first thing to mention is just as water is wet, Forte can play guitar and he has the endorsement deals to prove it. There was some mention in the promo info that Forte actually opened up a show for Yngwie Malmsteen back in the late 90's. I can just imagine what it was like back stage with those two divas. Yngwie was probably like "now I know how Blackmore felt when I came along." Yeah it's true a guitar god's reign only lasts forever if he dies in mid career, ala: Hendrix. Therefore lets look at The Shadows Compendium as a show off effort. Forte even brings in a few guests like MEGADETH's Glen Drover and Jeff Loomis from NEVERMORE for a duel and beats them down.

What a guy that Forte is. In fact rumor has it after one day's recording session he demanded that a studio tech be strangled to death for bringing him the wrong type of bottled water. Hey you don't wanna ruin the vibe of a true guitar master. Let me tell ya this doesn't fall under what I'd consider "extreme metal". I will say that Forte doesn't spend all his time with in the classical realm on here. There are flourishes of more modern metal flavors which a layman like me will recognize. I'm actually a fan of classical music and I've even got the string less cello in my closet to prove it. Be that as it may this is the type of release that readers of Guitar Player magazine would like. I have to call it what it is, musically this is a fantastic release, period.