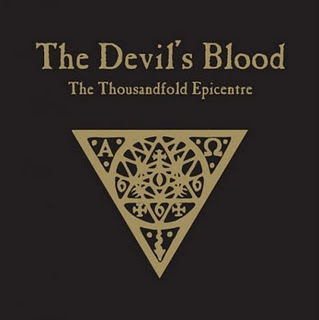 Before getting into the new release let me explain my path to this Dutch "satan-delic" act . First off I must admit that I got into THE DEVIL'S BLOOD kinda late compared to others out there on the Interweb. While everyone else was harping on about their debut full length, The Time of No Time Evermore, in 2009. I was just listening to their Come Reap EP which came recommenced by Erik Danielsson of WATAIN. I thought that one was pretty good with it's late sixties early seventies occult meets psych rock vibe. Here you had this female fronted band from the Netherlands all clouded in mystery, going out on stage covered in fake blood, performing songs with lyrics dealing in the philosophical nature of satanism and the occult. They also were channeling bits of COVEN, JEFFERSON AIRPLANE and even ROKY ERICKSON (they covered "White Faces). I quickly picked up their other short form material. For me THE DEVIL'S BLOOD, along with a few other new bands who came out in the past four years, were part of this (I know you're gonna hate it but I've gotta say it) new wave of 70's rock. It's not all truly metal and I still don't understand how some people can really equate it with doom. It seems like nowadays almost everything gets tagged as doom but that's another story. Either way I thought they were a great band. So when I got their debut full length I was kinda disappointed. It had some decent songs on it but for the most part sounded a little clean and AOR radio friendly. I'd chalk that one more onto liking them in the short form example than it being a bad release.

So here we have the band's sophomore effort with it's European release date of 11-11-11 qualifying it for last years best of listings for some people while having it's mid January release on Metal Blade making it a most anticipated release for 2012 in the USA. There's nothing mystical about that one people. It's just good marketing practice along with putting out an album teaser CDEP that came out from Germany's Rock Hard Magazine. That one containing a couple of live tracks from their rituals in 2010 (they call their shows / performances, rituals get it), the title cut of this full length along with what could be construed as the single "Fire Burning". Actually I was just happy with the CDEP (yes I got it) because this full length is a bit much. For anyone who demands that a band have an obvious natural progression from album to album well here you go. THE DEVIL'S BLOOD have gone from what they were to some retro-fitting of JEFFERSON STARSHIP and BLUE OYSTER CULT for modern audiences. I see it as a logical step almost like watching musical history repeat it self. Then again I lived through that history. They've also pushed the experimental aspects to the level where you just might forget half of this release because you're in a trance. For example the opening intro cut is two minutes of haunting mood inducing noise which could've been cut by a minute and a half. Then again for people who've never been subjugated to years of PINK FLOYD over play abuse you might like it.


I can cut The Thousandfold Epicentre in two and be perfectly satisfied with keeping one while forgetting the other. The fifteen minute long "Feverdance" would probably sit well with FLOYD or HAWKWIND advocates who have nothing better to do then sit in their bean bag chairs, fart and listen along while waiting for their laundry to dry. I kept that clean since one can only wonder what loneliness really brings to the idle hands of those who believe this is hip and cool. Although if you let this release repeat play then it bleeds back into the opening intro. I'd also say that tracks like “Everlasting Saturnalia” and “The Madness Of Serpents" left me bored. The whole reason for that is the upbeat first half of this release which captures the band's original sound and style. The actual opening track, “On The Wings Of Gloria”, has a superb harmonious vibe that builds with excitement through out. “Within The Charnel House Of Love” actually touches the borders of metal as well as the title cut. Songs like "Die the Death" and "Cruel Lover" are heavy on the melodic side of psych rock which keeps things interesting. It's the two standouts "She” and “Fire Burning" which will capture most listener's attention especially older ones who've been around for a while. One spin on the mid to late seventies FM radio dial back in the day could've spawned similar results as far as catchy hook laden tunes go minus the androgynous quality of the vocals of course.

According to the band this release is "a new litter to be cast upon the sacrificial flames of the bull-headed god that resides on the plane of Gehenna. Eleven new children shall pass through his flames to become reborn in chaos." In other words, sparing you from a wiccan's thesaurus worth of tripe or the typical creative writing class babble from Pitchfork hoovers, The Thousandfold Epicentre is eleven cuts that will have some of you excited while others you'll regret were even born. But in the end the music doesn't really matter does it? Such as music can be a reflection of life once you turn on the lights and tear off the fancy dressings your left with something that's decent with lyrics ripped from a school girl's diary whose been exposed to Poe and Lovecraft. I'll wager that the mainstream will jump towards this much like they did with CRADLE OF FILTH in the case of black metal. Their first couple of short form releases including the debut full length are still for connoisseurs while this new one is for consumers. The packaging is fancy, the music is of that oxymoron quality "old and yet new" (which is what one schmuck said about this in a early review) and it's branded new and improved 1970's hard rock. Toss in all of the mystery of their band names, the vintage classic rock / psychedelic sound, the bloody stage show along with the satanism / occult trappings and you've got yourself a chance to be on the cover of Spin or even a frequent storyline for hipster website postings.