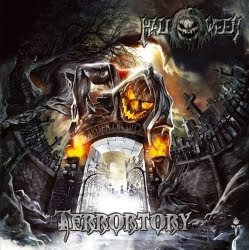 For all of you people out there who consider yourselves 1980's heavy metal aficionados, you're surely lacking if you don't have a copy of Don’t Metal With Evil in your collection. If you did then chances are it's sandwiched between GRIM REAPER and IRON ANGEL. That was this band's debut from 1985 and is a classic as far as American second tier heavy metal goes. I'm obvious not an aficionado since I don't own a copy of that album but I know 3 friends who do have it. They've also seen them live back in the late 80s in some clubs which I've been told were legendary shows. HALLOWEEN was this four piece act out of Detroit, Michigan who dressed like MOTLEY CRUE and had an Alice Cooper influence to their sound which was a big part of their horror inspired musical style. If you're curious than there was a compilation release from 2008 titled 13 Tracks of Horror which should get you up to speed.

When this came in for review I was surprised as hell. First off I didn't even know they still existed. Secondly I didn't know they had more than one full length release. I knew there were cassette tapes floating around but along with their debut HALLOWEEN also put out full lengths in 1991 and 97 plus in 2003 and 06. All I could say about that was "wow", then I heard this and well? There are times when old bands come back to remind us of our past and maybe reinvigorate the present. Then again there are those who come back like ghosts to haunt us in their horrible guise. After listening to this I believe the latter is true here. Even though HALLOWEEN continues on with original vocalist Brian Thomas and bassist George Neal I can't see this as more than just a fans only type of release. Being that only a true fan could get through all of it.

The main problem with Terrortory is it's lack of a foothold. HALLOWEEN seems to be tracking the musical landscape. They try to bring back the 80's feeling in their sound on the rocking cuts but add to much modern touches. There's a couple of ballads on here as well. Their longer numbers drag on far too much. Worse yet is the production on here which has the vocals out in front too much of the music. Thomas is a decent enough singer that he shouldn't literally overshadow everyone else. Since I don't know what their other material sounded like I'm only going on comparing them to their mid-80's output. This sounds like an old band trying to be relevant in the modern world which it can't. Even the top tier acts from the 80s who are still around today can't break their new stuff in which is why they've become oldies but goodies bands.