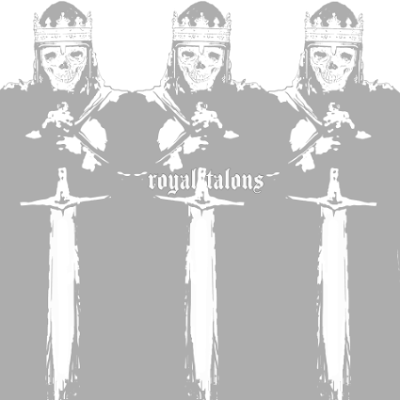 
I think by this point in the musical game a band like ROYAL TALONS fits in well since they just throw everything heavy at your head. Later on you can pick out what you like the least but for now you're getting it all at once. This power trio hails from Denver, Colorado a place already known for spawning some unique, extreme music bands in the past. This one is just the latest. The ROYAL TALONS sonically charge their brand of sludge and stoner psych. Which means there will be no sleeping or trance meditating here people. This five song debut of theirs is a diverse batch of material which is best served while you're fully coherent.


When listening to this release I can't help but feel that this band's natural environment is it's biggest influence within their music. The vocals sound like screams from atop the mountain which echo down into the valley. The music is like a forceful wind gust bending trees and shaking infrastructure throughout the land. The guitar riffs sound distorted to the point that it sounds like bacon frying in the pan. And when they indulge in a solo it's like the soundtrack to watching an eagle soaring in flight. That's just on the first cut "Shark Skull". All of the songs on here are long epic workouts that start with an atmospheric vibe which leads on into a more aggressive finale.

"The Scroll" is another perfect example with it's atmospheric plucked bass opening with leads into some sludgey power crunch. The song finalizes with this ethereal psych beauty. The solo at the three quarter mark will send ya fuckin chills, amazing shit here. This whole release is masterfully done with not one track leaving you wanting more. No reinvention of the genres is at play on here. The band simply takes plenty from others and remolds it into their own perception. Overall it's a combination of OM and GRIEF since the band likes keeping things diverse. Not only is this interesting as well as a great listing experience (it took me ten listens before I could write one one word about it). I also consider this to be one of the best releases you will here in 2012.