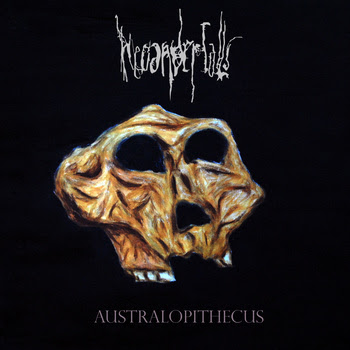 I was just telling someone today that doing SFM666 was cool because every once in a while I learn about a new exciting band from somewhere I've never been. I should be more careful of what I wish for. On first listen the NEOANDERTALS sound like Estonia's Tony Levin and Bill Bruford. For those of you who don't know that's the rhythm section for the Discipline jazz fusion era of KING CRIMSON back in the 80's. The NEOANDERTALS are a two piece act consisting of Rain Pohlak on bass and Sandra Vungi on drums. (although when this was recorded Roland Seer was on drums) This is an instrumental jazz fusion release albeit with a twist.

While I was absorbing all of what Australopithecus had to offer I was also doing some research on NEOANDERTALS in order to get an understanding. Musically it's fairly tribal as well as primal in structure which goes with what I found. Essentially this duo are back to nature types who live in their own self built cabin out in the country. (there's a documentary clip filmed by the Estonian National Television on Youtube) Ironically you need electricity to plug in your amps as well as record your music but that's neither here or there. The band has two previous full length releases: Neanderthals Were Master Butchers in 2007 and Ebu Gogo Gutting the Child from 2010, both of which had vocals.

This new one has no vocals then again I'd be hard pressed to imagine applying vocals onto any of these tracks. If I was a toker (you know what I mean) then I could see relaxing, spacing out while listening to these neolithic jams fill the air with eclectic rhythms. There are times when the bass rumbles like the bubbling of primordial ooze. The drumming is a sort of long range tribal communication from pre-language times. Yeah I'm giving this my best shot at objectivity although I can just wonder what others have said about this band. In all honesty I didn't know how to exactly describe this.


After multiple plays you do feel relaxed as the beats make for a decent background atmosphere. I had it playing for three hours tonight. Near the end I stepped outside for a smoke along with enjoying the foggy night atmosphere. While out there I thought I saw Bigfoot dancing in the tree line. My thoughts were "oh great I better turn the music off before it brings all the primates out of the woods. The next thing you know is that I'll have a whole back yard full of em dancing in a hairy hoedown." NEOANDERTALS are definitely unique, good at what they do and for fans only.

Here's part of the documentry on the band