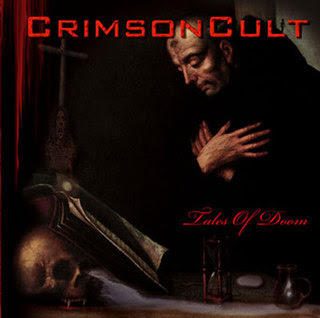 There's a horror / satanism movie from 1968 called The Crimson Cult. It was also called Curse of the Crimson Altar and starred Boris Karloff, Christopher Lee plus the incredible Barbara Steele. Yes I'm a huge fan of hers. Unfortunately this Austrian band is not influenced by that movie as far as I can hear. Although this band has a lot going for it that makes for a decent metal listen. The band has got the title right for the most part. CRIMSON CULT meld progressive power metal, yes there's keyboards, with basic doom. Walter Stuefer has a powerful voice invoking comparisons between Dio and Messiah Marcolin. Guitarist (and also keyboardist) Gunter Maier is the virtuoso as he pairs down-tuned riffs with piercing solos that fire out and into your skull like laser beams. Gunter has that classic metal touch part Yngwie part Blackmore. You can't go wrong with that.


Tales of Doom is this band's second full length. Their first one, a self titled release, came out in 2009. I have no idea how that one was but I'd say this is pretty good. I don't know how they pull these songs off in concert without a live keyboardist and peddles or background taped music doesn't cut it in my not so humble view. As far as their music highlights go this release opens fairly well. "State of Fear" is an all out rocker, very powerful and melodic. This is definitely a kick back to the 80s. Later on the release "Second Life" is almost a fast tempo reprise of the opener. On "Behind the Curtain" is where we immediately get that doom feel thanks to Gunter's mammoth riffs. He pulls the same magic on "Choshinja". The Dio factor kicks in strongly on the nine minute "The Long Way Home as well as the doom laden battle hymn "Warrior Son".

Unfortunately not everything is so epic and rocking on Tales of Doom. My disdain for ballads was resurrected when the band brought out "On the Edge". Impressive soloing by Gunter still couldn't change my mind. The same went for "Crimson Empire" and "Institution Christ" which wasn't bad just out of place. The closer "The Inquisition" is an Yngwie inspired instrumental which would fit nicely in their live set prior to their closing number of course. The CRIMSON CULT are the kind of band that gets that miserable middle slot of a gig. They do grab your attention enough to stand there in awe for most of the time which ain't a bad thing either.