MARCH OF THE HORDES / ESCAPE THE FLESH Split CD review 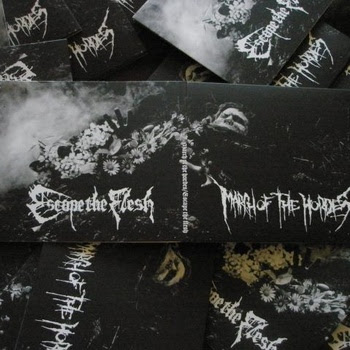 MARCH OF THE HORDES / ESCAPE THE FLESH Split CD


This is the type of stuff I like, crusty death metal filth. There's no pretentious bullshit, no mood inducing intros, story lines or what have you, it's just full on aggression. It's beating people up music. Both acts on this split release hail from the Czech Republic, contribute two cuts a piece and sound quite similar to each other. The basis here is OSDM (old school death metal) being dragged through the streets for an extra added degree of crude. Both acts don't shy away from the influences of their peers from the past. In fact it's as if they're swimming and playing in the filth in order to create a bigger mess.

The first act MARCH OF THE HORDES are the speed demons of this pair. Not to say they play fast but it's (the song "Frozen Void")
just perfect for slam dancing and headbanging. Obviously Swedish DM grooves are what these guys favor since that old style incorporated a lot of hardcore / crust. In fact it's so thick on here you would need a chainsaw to cut through it. Their second cut "Last Stand Of Heaven" is mid-paced yet slowly builds up this thick atmosphere of dread. Crunchy guitars and tar coated vocals, how could you not like that.

The second band, ESCAPE THE FLESH, is more steeped in the death doom grooveness of creeping across the landscape to invoke heads to shake wildly. Their first cut "Pestilential Throne" is like a monstrous snake which crawls along until it finds it's victim. At it's mid-point the song breaks into a faster beat which is akin the snake catching something and feeding upon it. Afterwards the original pace continues as well as the search for prey. Their second cut "The Black Fog" is slightly reminiscent of it's title. The song varies in speed, switching from slow and choking to a hurried pace as if to try out running the coming darkness. Unfortunately it overtakes you and it's goodbye. Great stuff from both bands.