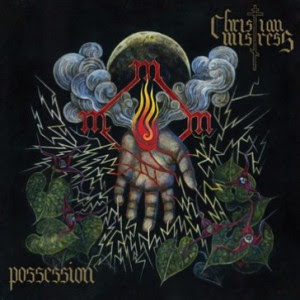 
The more I listen to this release the more I scrap everything I've previously written down for notes and start over. I'm sure there will be a lot written about this band with references made to NWOBHM, female fronted bands of the past, metal guitar duels, et al. I'm going to cut away from all of the dense crap which will be filling up future webspace and give you a quick an honest rundown. CHRISTIAN MISTRESS are the type of band who I commonly refer to as "sounding like they have stepped out of a time machine". Sure any band could pull influences from some past act and be a copycat but that's not the case here. This Olympia, Washington five piece have grasped the essential elements of mid to late 70's metal greatness and are repeating it beautifully today. Genre purists and wanna-be journalistic taste-makers are probably pulling their hair out (and not necessarily from their heads) trying to pigeonhole this band. I'll make it easy for everyone, CHRISTIAN MISTRESS are a Heavy Metal band, nuff said on that topic.

On Possession, their second full length, CHRISTIAN MISTRESS repeat as well as enhance some of the strengths they showed on their 2010 debut Agony & Opium which came out on 20 Buck Spin. The band plays like a well oiled unit leaving plenty of room for everyone to shine. Musically I disagree with all those who wanna tag this band as NWOBHM revivalists. When I listen to this I think of two bands from the 70s, UFO and JUDAS PRIEST, who were cranking out great music prior to the genre term creation. CHRISTIAN MISTRESS follow a template forged by those two acts. They create a diverse mixture of songs with varied rhythmic flourishes and dueling guitar showmanship by guitarists Oscar Sparbel and Ryan McClain. Vocalist Christine Davis is more than just a front woman / singer. You would be hard pressed to find someone in the metal realm who compares to her vocally. I was looking at soulful punk acts or garage bands from the 90s for comparative singers since Davis's style is so unique and powerful.


As far as songs go, in my not so humble opinion, Possession is perfection from start to finish. You learn that quick when opener "Over & Over" comes flying out at you like a man on fire. Notice that CHRISTIAN MISTRESS's music is not about the riffs either, albeit there are some decent flurries, instead it's about the solos and the licks. Witness this on cuts like "Black to Gold" or "The Way Beyond". One big surprise on here is that the title track is actually a cover from an obscure Swedish band FAITH. (For you collector scum look for the Hymn of the Sinner 7"er from 1986) As for all out old school rocking "Conviction" fits that bill in a UFO type of way. While on "Haunted Hunted" Davis adds some strong sultry swagger to her already amazing vocal repertoire. When the final cut "All Abandon" fades out you will be pleading for more.