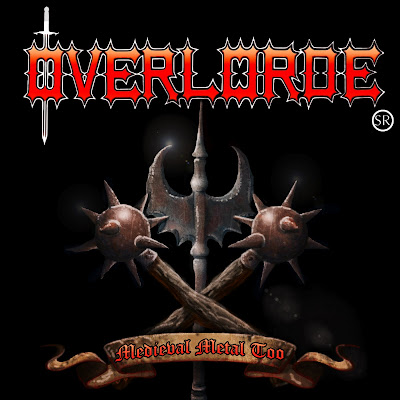 
This is for those of you out there (that would be fans of the music and not collector scum) looking for obscure metal bands from the 1980's. The purveyors of everything classic, North Carolina's Heaven and Hell Records, has dug up another dirty diamond from the past. Overlorde was a band from Fayetteville, North Carolina (not to be confused with the one from NJ) who in the mid-80s released a four track demo titled Medieval Metal. That release would gain the band enough attention to get their song "Keeper of the Flame" placed on the Metal Massacre VIII compilation in 1987. OVERLORDE sound was based on the twin guitar attack, layered vocals and catchy rhythms all of which was key to the whole NWOBHM influence.


As always with bands determined to having cult status OVERLORDE disappeared from sight. Then again by the late 80's their style of metal was out of sync with conventional tastes since NWOBHM was dead, thrash was dying out and death metal was on the rise. Fast forward to the present day and now we have this gem. Medieval Metal Too contains the band's four song Medieval Metal demo, which during it's original release sold 10,000 copies. Along with the earlier mentioned "Keeper of the Flame" that demo also had the upbeat head banging "Full Speed Ahead", the more classic 70's metal stylings of "Enchantress of the Night" as well as the Zager & Evans cover from 1968 "In the Year 2525". The release is filled out by a few unreleased cuts plus the Metal Massacre compilation version of "Keeper of the Flame". By the way the S.R. at the end of OVERLORDE's name means Still RockN and to differentiate them from the NJ band of the same name.