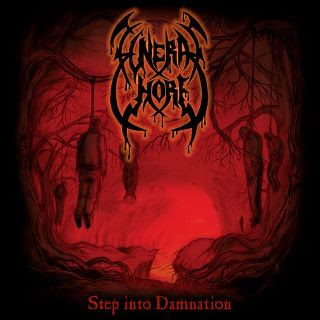 Let's see what we have here, a Dutch band playing OSDM (old school death metal) and the release is on a Mexican record label. Well I'm in my happy place. After putting out a handful of short format releases over the past few years FUNERAL WHORE finally comes out with their debut full length. This band doesn't waste any time setting the tone which is brutal. Imagine sitting in a bar when suddenly the front door is kicked open and in walks a seven foot tall three hundred pound brute who proceeds to lay waste on every patron inside. That's what opener "Wasteland of Corpses" reminds me of and the carnage continues throughout this eleven song hate fest.

As all of you readers know by now my ancestral heritage is Dutch. I also have an affinity (obviously) towards Dutch death metal acts like ASPHYX, HAIL OF BULLETS and PESTILENCE. This act sits well with those legends albeit their sound leans more toward Sweden's GRAVE more than their nation's DM peers. Still You can't go wrong with that. Other than just crushing your skull with pure unadulterated old school brutality FUNERAL WHORE also include plenty of head banging groove. Songs like "El Salvador Death Squad", "Buried In Hell" and "Camp Blood" hint of some USDM influence like OBITUARY. Other times the band has tendencies to give off a pure INCANTAION vibe. No complaints here since going by the playbook of heavy riffage, crusty d-beat drumming and beast like vocals is fine by me. Yeah I'm bias so what do you have a problem? I'll see you in the bar.